And this year – for the first time remotely

At Astea Solutions we love traditions and we have a ton of them… one being our internship program. 🤓 This summer Astea organized its 6th software internship program for developers, QA engineers and DevOps engineers. December marked the end of the program with 3 engaging demos and lots of smiles.

3. So how did the remote internship go?

The internship spans 4 months and consists of 2 stages. In the first 2 months the interns have daily lectures with lots of practical exercises including live coding sessions. Then, in the remaining 2 months they are divided into teams and work together on different in-house projects through which they familiarize themselves with all the steps of the software development process. 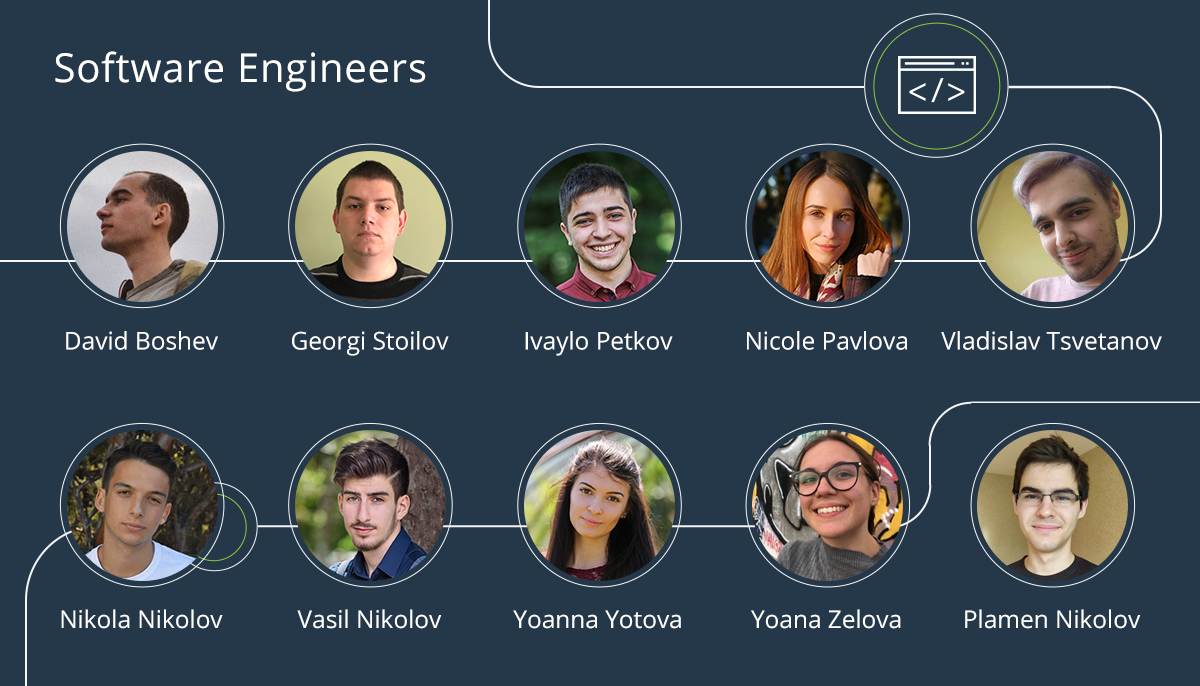 After a short introduction to the basic tools that are used in the program the participants focus on their respective fields. For the developer role our interns go through everything that is necessary for full stack web development. They start with an introduction to JavaScript and TypeScript, to relational databases and object-relational mapping. This knowledge is then used as together with their mentors they dive deeper into the client-server architecture. On the front-end part the focus is on React with the help of Snowpack and Material-UI. On the back-end the main protagonist is Express, which is preceded by a practical overview of HTTP and REST.

Similarly, our QA interns go through a first phase where theory is mixed with practical exercises. They start with an introduction to JavaScript and TypeScript on one hand and Git and Visual Studio Code on the other. Then with the help of their mentors they delve into the intricacies of end-to-end testing with tools such as Selenium, WebDriverIO, Mocha, and Chai, API testing with Insomnia and of course manual testing where TestLink comes into play.

Our DevOps interns focus on everything necessary to set up, automate and maintain the infrastructure used in the development process and in the final product. They do so by exploring tools for containerization and orchestration such as Docker, Docker Compose and Kubernetes, which are then used to deploy the applications in a fully automated way. In the build up they, together with their mentors, go through and improve their knowledge in many important areas such as shell scripts, networks, resource monitoring, virtual environments, and configuration management. And as it often happens in real life, the DevOps interns were an essential part of all three final projects.

This year we had to tackle one more challenge – organizing a remote internship program. It wasn’t really about the technicalities since we already had significant experience with remote working tools. We provided all interns with the necessary hardware and software. And thanks to today’s courier services, paperwork could be handled remotely, too.

We were, however, more concerned that the day-to-day communication between mentors and interns as well as between the interns themselves would be clumsier compared to previous editions. And communication plays a key role as the interns learn to work in a team towards a common goal.

So how did the remote internship go?

We had to get a bit more creative with our virtual communication and we got some inspiration from our team building activities. So for example, the interns and mentors had the opportunity to introduce themselves through… emojis. At Astea we had this challenge for a few weeks where different colleagues were taking turns translating favorite books, movies and songs into emojis and sending them to the rest to be guessed. Emojis really make our lives a bit easier. 😀 Interns and mentors also played some trivia games in Мeet in order to get to know each other better. They also met in person at the office a couple of times whenever the epidemiological situation allowed it. Gradually, everyone got a bit more comfortable after spending some time together.

As for the dev training, the mentors introduced the flipped classroom model in their process. They were sending materials in advance so that the interns could get acquainted with the subject beforehand and focus on live-problem solving. Some of the lectures were pre-recorded and consisted mainly of live-coding and explanations. Lectures were generally 1 – 1.5 hours long and were followed by examples on a real project, which was maintained in the company’s GitLab.

In addition to this theoretical part, the interns had to do а lot of work on their own. As an exercise the dev interns had to develop a feature for a project with a common topic. They could choose what to add based on their preferences and they even made mini demos of their work on the project. The QA interns on the other hand took a shot at expanding the end-to-end tests for an already implemented application. And all of this happened even before their group work began! Stay tuned to learn more about the web applications our interns developed in the second part of the internship program. ☺️